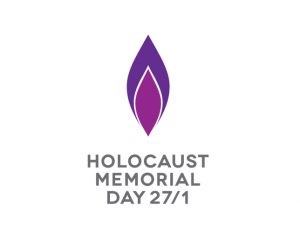 27th January is the day we pause for reflection, and remembrance for the six million Jewish people (Including anyone they consider different for example gay people, and the disabled) who were persecuted by the Nazis; and the genocides that have occurred in Cambodia, Rwanda, Bosnia and Darfur.

One Day is the theme for this year’s HMD memorial day.

“One Day is just a snapshot in time and therefore cannot give the full picture, the context,
the background that is needed, but it can help bring a piece of the full picture to life. The age
or gender of the victim, or their geographical location ensured that no One Day during the
genocide was typical. The same date would be experienced very differently by Jews hiding
in France, Jews incarcerated in Auschwitz, Jews awaiting their fate in Hungary, for example.
For those who suffered for days, weeks, months, years focusing on just One Day is a
starting point, a way in for us to learn more about what happened during the Holocaust and
the genocides that followed in Cambodia, Rwanda, Bosnia and Darfur.”

In 2000 Fumiko Ishioka a museum curator in Tokyo is intrigued when she receives a small suitcase from the museum at Auschwitz. The name Hana Brady with the date 16th May 1931 are painted on it. Fumiko writes about her experience of tracing the details of Hana’s short life. This is an award-winning story of the Holocaust.

‘Roses from the earth’

The plight of Ann Frank, and her family that Ann wrote about in her diary touched millions of people Worldwide. This is a biography of Ann Frank’s life written by Carol Ann Lee. A life tragically cut short by the Holocaust, and the persecution of Jewish people by the Nazis during the second World War.

‘The Boy in the striped pyjamas’

‘The Boy in the Striped pyjamas’ by John Boyne is a beautifully written story of the tragedy of two boys. The son of the commander of a concentration camp and a little boy who is in prisoned by the Nazis innocently become friends. They naturally like all children have no comprehension of the danger and evil that is being perpetrated in the death camp Auschwitz.

‘Paper clips’ is a documentary film of the Holocaust, each paper clip represents a life lost. Junior High school children attempt to collect 6 million paper clips. They look at interviews of Jewish survivors, and speak to knowledgeable people on the subject.

Ida a young Polish girl is on the verge of taking her vows to become a nun, discovers a dark family secret that happen during the Nazis occupation.

Victor E Frankl, survived 3 years in Auschwitz due to practising logotheraphy. He looked for meaning in his suffering, and the suffering of others in the concentration camp. He found hope, in thinking about his future and remembered the love of his wife. He looked for meaning in the beauty of nature. This book is more than a memoir of Victor Frankl’s life. Victor writes about the effect mentally daily life in the concentration camp has on fellow inmates and himself.